A Brief History of St. John’s United Church of Christ

St. John’s church began its organized life in a schoolhouse in Oak Hall around the year 1800.  Since they had no settled pastor, they had to depend on traveling ministers who happened to be in the area.  Sometimes Henry Rossman, a Rebersburg school teacher, would conduct a service.  On April 27, 1812 Mr. Rossman was licensed and his call approved to pastor all the Reformed churches in Centre County and part of Clinton County.

In 1822, under the leadership of Rev. Rossman, the St. John’s Reform Church was organized.  This congregation, along with Zion Lutheran Congregation, continued to meet at the Oak Hall Schoolhouse.  On June 6, 1825, the two congregations, acting jointly, laid the corner stone of the Union Church of Boalsburg, on the site of the present Zion Lutheran Church building.  The building was dedicated on August 4, 1827.

By 1860 the Reform congregation felt the need to have its own building.  The Union Church was purchased by the Lutheran congregation and the Reform congregation built a new building next door.    On August 11, 1861 the cornerstone of our building was laid.  On May 18, 1862 St. John’s German Reform Church was dedicated.  Six years later, in 1868, the church received a pipe organ, thanks in large measure to the efforts of organist Joseph Meyer.  This, the first pipe organ in Centre County, was built by Charles Durner of Quakerstown, PA.  The day before the dedication of the organ, while at its console during a worship service, Mr. Meyer had a heart attack and died shortly after.  The pipe organ was dedicated on October 11, 1868.

Because of our experience in cooperating with others, our congregation has found it natural to merged with the Evangelical Synod of North America in 1934 and then with the Congregational Christian Church in 1957 to become the United Church of Christ.  One sign of the ecumenical spirit of our congregation is the presence within it of members from many denominational backgrounds.

On August 7, 1977 the Witmer family gave a gift of 6.88 acres of land in Shingletown to St. John’s UCC and Zion Lutheran Church.  This land became Witmer Park where the two churches jointly hold a Bible Day Camp program to this day. 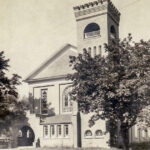 Shortly after the turn of the 19th century the congregation decided to remodel and enlarge the church.  This remodeling gave the building the exterior front appearance it has now.   The present arrangement of the Sanctuary was also made at this time.  The rededication service as held on November 2, 1902.  In 1971 the church carried out another extensive renovation program.   A service of dedication was held on November 7, 1971.  At this time, Prof. Karl Moyer, a relative of Joseph Meyer, the first organist, gave a recital on the newly restored pipe organ.   On May 18, 1997 the newly restored stain glass windows in the Sanctuary and Narthex were dedicated.

We have a strong and faithful history as a congregation.  As we look to the future, we pray that St. John’s Church will continue to share the good news of the gospel and be a vital and visible presence in the community of Boalsburg.

What We Believe:
Our belief finds expression in the Statement of Faith of the United Church of Christ.