Rev. Dr. Blair joined with us in the fall of 2021.  He grew up attending Zion UCC in Stroudsburg, PA. He graduated from Lafayette College and Princeton Theological Seminary, completed a year’s academic work at New College, Edinburgh, Scotland, studied theological German at two Goethe Institutes, and served for a year in a congregation in Berlin, Germany. His Doctorate in Ministry comes from Columbia Seminary, in Decatur, Georgia.

In total, Rev. Dr. Blair has 31 years of ministry experience and is looking forward to being in ministry with us. He has three grown wonderful children, is an avid cyclist (road and gravel), and enjoys connecting with people, especially over coffee and something tasty. To quote his Pastor Profile, “I want to have a steady diet of preaching and teaching and encourage others to grow in new ways of ministry.”

Marieta Smith began working part-time at St. John’s on October 17, 2007 as Office Assistant.  On October 15, 2009, she became the Office Manager.  Marieta grew up in Centre Hall and is a graduate of Penns Valley Area High School.  She has been a member of Trinity United Church of Christ in Centre Hall for more than 30 years.  On July 30,1993, she married John D. Smith and they live in Potters Mills.  Her hobbies include camping, boating, tubing, canoeing, counted cross stitching, making jewelry, painting, scrapbooking, swimming, card playing, photography, shopping, mowing grass and spending time with the ones she loves. 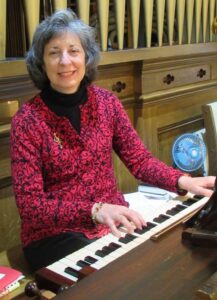 Paula has been a resident of State College for over 30 years. She received her Undergraduate and Graduate degrees in music from Hartt College of Music and Indiana University. She has enjoyed playing organ and piano at St. John’s for over 10 years as well as a number of other churches in the area. She also teaches piano privately to students of all ages. 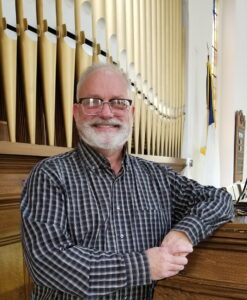 H. Ryan Ditmer  Ryan was born and raised outside of Port Royal, PA in Juniata County, started playing the piano when he was 3, and has been playing for church services since he was 10. After living and working in Bloomsburg, PA he moved to State College in January 1985 and then to Boalsburg in January 1987. Ryan joined St. John’s UCC in the spring of 1986 and has been our organist/accompanist both full time and part-time since then. Currently in addition to playing at St. John’s, Ryan is the Associate Organist at St. Paul’s Methodist Church and an Accompanist at Grace Lutheran Church, both in State College, PA. Ryan is a member of the American Guild of Organists (AGO) and has served as the Dean of the State College Chapter. Ryan was also a member of the former Westminster Handbell Ensemble from Our Lady of Victory Catholic Church in State College and has sung with both the State College Choral Society since 1990 and the Orpheus Singers since 2012. During the week Ryan works as a Project Manager for Glass Mender Mirror & Plate Division, Inc., a glass and glazing company, in Altoona, PA. When he’s not playing, rehearsing or working Ryan, is driving, polishing or showing one of his three collector vehicles and is currently restoring a 1970 Dodge Charger. 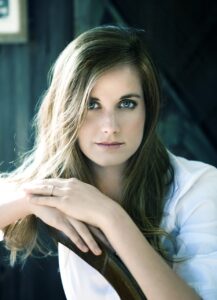 Dr. Gustafson joined the St. John’s music staff in the fall of 2021.

Praised for her “exquisite sensitivity” and a “style filled with class and elegance” by La Voz de Asturias (Asturias, Spain) and recognized as a “talented player who doesn’t fit the cookie-cutter mold” by Lucid Culture (New York City), American pianist Amy E. Gustafson has performed across the United States and in both Western and Eastern Europe. Her debut album, Reverie, consists of music by Claude Debussy and was released in June 2017.

Recent performances include replacing legendary pianist Abbey Simon in Los Angeles at LACMA’s series, Sundays Live, an appearance with the Sofia Sinfionetta in Sofia, Bulgaria, and a concert tour in Dallas, Texas with her piano duo, Duo Azul. Other recent engagements have taken her to Spain, China, and Canada, and she has also performed New York City venues, such as Weill Recital Hall of Carnegie Hall, Steinway Hall, Trinity Church Wall Street, the Tenri Cultural Institute, CAMI Hall and the Kosciuszko Foundation. 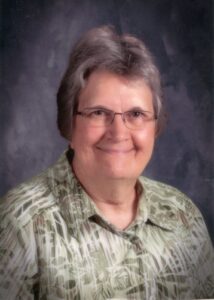 Sue’s mother and grandmother were a great influence on her to pursue music as a career.  Her mother encouraged Sue to practice piano every day for 30 minutes.

After receiving her degree, Sue taught music and elementary education for about 30 years.

Sue, now retired, lives in Centre Hall and has many family gatherings there with her mother.

Sue currently serves as the director of our vocal choir and our handbell choir.